I love Randall Munroe’s XKCD, but going to his site every day is potentially problematic because it’s so easy to get sucked down the rabbit hole of clicking “random” over and over and over.

At the same time, he’s been writing comics for years and I haven’t kept up. I wondered if there wasn’t some way that I could pull five, just five images into my site every day for a digest of sorts.

Over time I would catch up, but I wouldn’t have to worry about fighting the gravitational pull that is XKCD.com.

So, I set about building this (which is live on this site at /xkcd)

Some of the decisions I made up front on how the page would look and interact:

The building process turned out to be quite informative and full of stumbling blocks.

Below, I highlight a few of them and the final result.

Step one to building this gallery was to actually be able to get the images. Here’s where I hit my first stumbling block.

The XKCD site has a page dedicated to programmatic access of comics.

Seems straightforward enough. I tested the end point in Postman. 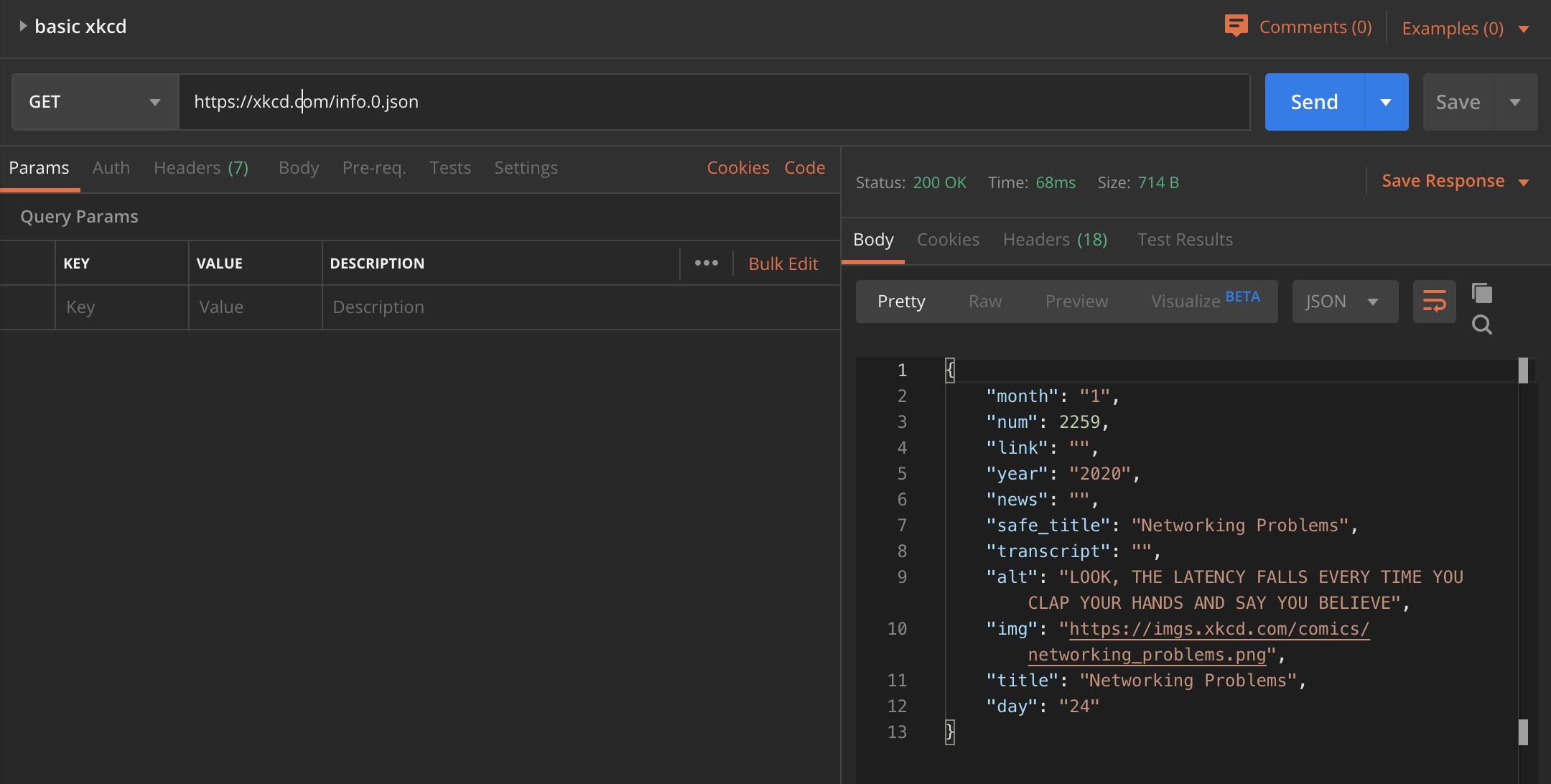 Unfortunately, this site is built on Gatsby, a statically site generator. One consequence of this is that I do not have access to a server in the traditional sense.

This is problematic only in that when I tried to make the same API call from the client, I received a CORS error.

I tried multiple different configurations on my request call. I tried JSONP. Nothing seemed to work.

Based on everything I read, in order for this to work, I’d need access to XKCD’s servers to white list my IP or allow cross origin requests.

Since that wasn’t going to happen, I needed an alternative solution. This is where Nicolas Marcora jumped in to save the day and pointed me to cors-anywhere.

A solution is to simply use the demo1:

Whew! I now have results. I can proceed to the next step!

One of the quirks I introduced in my design was that I wanted to be able to get the same images every time I hit the page for an entire day.

That meant I couldn’t just use Math.rand() to pull down five images. So, how could I do this?

When I first learned about hashing functions, my mind was blown. The quick summary is that they reliably transform data to always get to the same result. The variables are the input and the size of the hash. If you know that (and the hashing function), you can derive the answer.

Notably, this is not encryption. It can be reversed. There’s no concept of a public/private key.

This is one I have kept around from a course I took a while back, but it turns out to be a fairly common one. In researching hashing functions I found this post on http://mediocredeveloper.com which walks through each step of a nearly identical function.

Armed with a hashing function, I now needed to bound it. If I didn’t, when I requested a comic, it might not exist.

Randall is prolific, but he’s not written an infinite number of comics.

In fact, we actually already discovered the total number of available comics. The proxied request above was for the most recent comic, but in the body of the response, we see the num property. This turns out to correspond to the sequential indicator Randall has chosen to identify his comics.

With that information, we can write another function to make sure that we stay between 1 and the maximum.

A few quick notes about this implementation:

Encapsulating The Logic In A Hook

At this point, I have all the pieces I need to actually retrieve a number of images. Can I do it in a way that makes consuming them in a component relatively painless?

Normally best practice is to extract reusuable hooks and it’s very unlikely that I will reuse this hook elsewhere. However, I decided to extract it anyway. Why? Because it keeps my view component logic very simple.

What this hook does in a nut shell is:

How simple does that make my view component? Well, let’s look:

Pretty nice! This takes us to the final stage of the exercise - displaying the data.

This posed yet another problem for me. My first attempt was to use the pure-react-carousel library, however, the results I was getting were hardly ideal (all images were rendered on a single slide).

Sung M. Kim aka Dance2Die turned me onto nuka-carousel which turned out much better for me. It even has keyboard controls and by using a ref (thanks in no small part to Lee Warrick’s article React’s useEffect and useRefs Explained for Mortals I auto-focus on the carousel, so keyboard controls are available as soon as the comics load.

There is a lingering bug: the carousel doesn’t reserve enough space in the DOM initially for the first image. Once you move to the next image, this is resolved. This bug bothers me, but it’s also an opportunity to learn in the future. I’ll be back to fix it soon I hope!

Whew! That’s all I’ve got for today. It’s been a weird, wild ride but wow is it cool that I can wake up with an idea, spend a few hours thinking and tinkering, and with a little help from my friends build something that didn’t exist before.