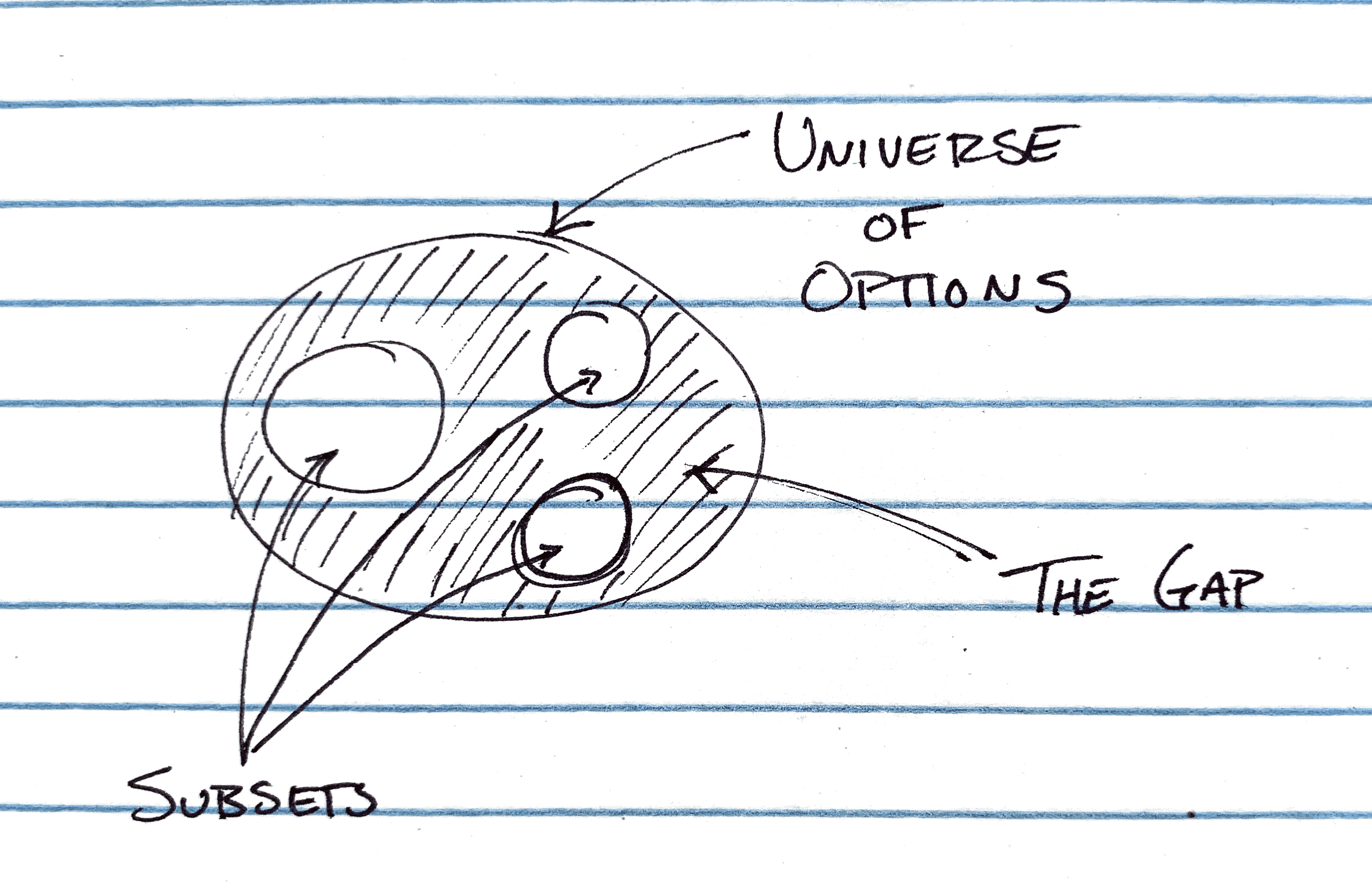 I want to highlight one way to create a subset of data. To get us started, let’s think about a universe of data. It’s a circle. Everything within that circle is catalogued and stored within a main object. We’ll call it universe.

We also have broken off smaller parts of the universe in the past. We’ll call these subsets.

Today, however we don’t care about the subsets or the universe. Instead, we want to use everything else. We’ll call this set of data, the gap.

At a high level then, we want an efficient way of creating this new, oddly shaped, subset.

If you’re just want the code, I put together a CodeSandBox.

In this particular case, the data types are actually different. Our universe is a single large object where the key is the name. In this simplified example, it looks pretty unnecessary, but you can also imagine that there are many other attributes in a single object (i.e., a is not just an object with a name, but {name: ‘a’, arms: 2, weight: 200, height: 6’6"}., etc.).

On the other hand, the subsets are Arrays where we have just the objects.

The first thing we want to do is combine all of the subsets into one single one:

At this point, on the one hand we have the entire universe of data. On the other - we have all of the subsets combined. All that’s left is finding the gap between them.

We don’t want to change the universe, so let’s first create a Set of just the identifiers for each element of the universe:

The Set is not strictly necessary, however, it offers two advantages over just a new looking at the Object.keys:

So, let’s make use of the delete shall we? For every item that exists in a subset, we want to delete it from our list of allNames:

At this point, allNames is almost our gap — it’s the list of names for every item that is in the gap… we just need to get the details.

So, let’s build that now:

To make sure that our our new gap has the same shape as the universe, but only with the elements we want, we first map over the allNames Set (which first is converted into an Array) and then create the tuple [name, universe[name]], which will finally be used to create the key:value pair in our new gap object.

It’s always fun to find new ways and patterns for accomplishing your goals. Today, that meant learning more about Sets and methods like Object.entries.

What are you learning today?

If you’re using Typescript, you will need to confirm that your .tsconfig has the downLevelIteration set to true.2 You will also likely need to import some of the more modern libs (e.g., esnext as Object.fromEntries and for ... of loops are relatively recent additions. Alternatively, you could replace these with subsets.forEach(/* ... */) and Array.from(allNames).