Occam was a 14th century theologian-philosopher who is perhaps best known now for his relentless insistence on using the law of parsimony. Also known as, ‘Keep it simple, stupid.’

This is a story where remembering Occam would have come in handy. Instead, I searched high and low for an explanation other than user error.

Want to jump to the end? The moral of the story is that if you’re using a content-type of application/x-www-form-urlencoded in an API call, be sure to check for extra spaces or new line characters in the body. Leaving them in creates problems.

Background And How I Initially Suspected URI Encoding

I use a password manager to create unique passwords for almost every service I use. This greatly simplifies my life without the mental tax of having to remember all of my passwords or reusing passwords across many services. It also means I copy and paste a lot of passwords.

When I signed up to explore the Better Business Bureau’s API recently, that’s exactly what I did. I went to my password manager and asked, “Please, oh please, generate a password I could never remember and which I never want to type!”

Poof. It did its magic and produced a 20+ character password complete with uppercase and lowercase characters, as well as fun special ones like #, $, and *!

Now, according to the instructions, all I had to do was send a POST request to get my authentication.

I opened up Postman and prepared for success!

After setting the header, I moved onto the Body and followed the instructions (almost) exactly! But as my screen shot below demonstrates, I left in either a space at the end of the line or a newline character. It turns out - that makes a difference. That’s when I started getting 400 Bad Request errors. 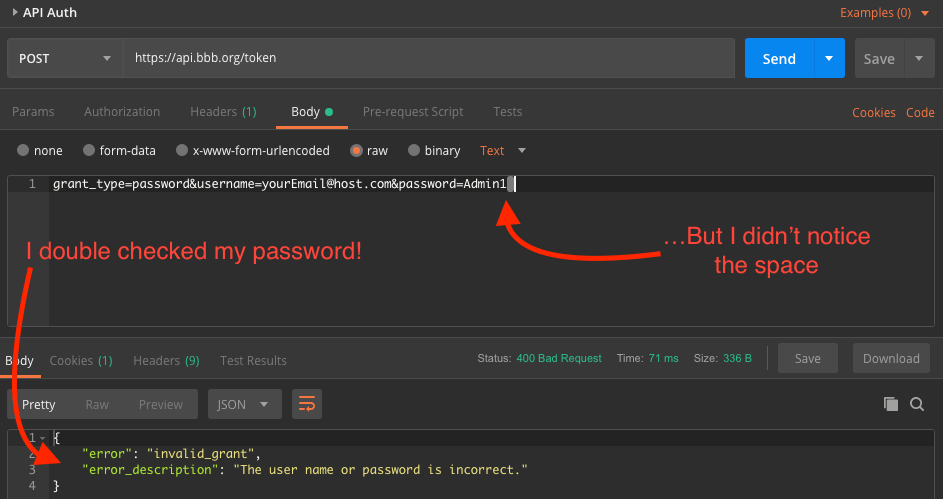 Instead of starting fresh and typing in my password one character at a time, I changed my password. I changed it to something really simple. It was Passw0rd (I needed a capital and a digit). It pained me, but I wanted to control different variables and figure out where I was going astray. Once I updated my password, I received my first 200 OK response along with an access_token! 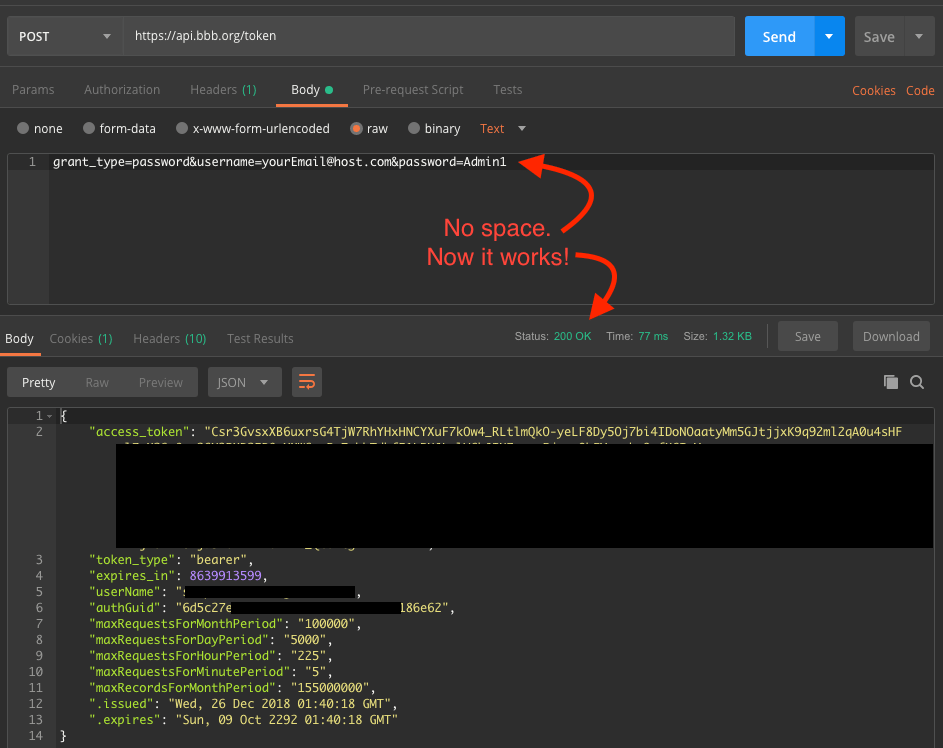 That proved it! The problem was the password! But why?

Let The Search For Answers Begin

I started hunting around for what was different between my new password and my old one. I of course didn’t notice the trailing space and/or think that it could possibly be the cause of all my frustration. So, I created a much more complicated theory. I found that URI encoding / decoding has reserved characters. Characters like #, $, and *.

So, I laid the blame at the feet of the team which chose to allow these special characters in their passwords when they had the potential to create so much frustration.

It was only when I started writing about this experience (initially with the warning to not use reserved characters if you had to encode them) that I figured out that wasn’t the problem.

Here’s proof that the URL encoding can go both directions. Using Dan’s Tools URL Encode/Decode (the same site that initially provided fodder for my half-baked theory), I decided to test.

If the encoding/decoding process was the culprit, I would not be able to encode a password with reserved characters and then get the same thing back. That, however, is exactly what I was able to do. I started by encoding A*D(S$#dasf1859. This returns A%2AD%28S%24%23dasf1859. I then decode both and get A*D(S$#dasf1859 for both lines.

It’s much easier to point the finger elsewhere when things don’t go quite right. Oftentimes, however, the answer is the simplest one. Yet another reason to never forget Occam or the KISS principle.