The room was quiet and the music soothing. After 50 minutes of flowing from pose to pose in a room approaching 95°F, the class collectively sank into matts and savored the respite. Everything was as it should be. Then a sneeze filled the air and the peace shattered, temporarily at least. Jolted out of my introspection, I thought about how I might have responded to her sneeze if I had been in a different setting. Certainly, I assumed, I would not have been as frustrated with the innocuous and natural occurrence, so why was I now - in Yoga where I was practicing mindfulness and understanding? Flitting past my self-criticism as quickly as possible, I decided I would do my best to make up for it and say “Gesundheit.” (When asked afterward, why do I feel it’s necessary to say anything, I stuttered and stammered until I declared that it was a nice thing to wish someone good health and it’s a reminder of being part of a larger community). It’s unlikely my words were heard by anyone else over the din of the music, but I felt satisfied, my anxiety dissipated, and I fell back into the flow of class.

After class, I couldn’t stop thinking about how I had almost let the mere presence of others affect the way I would behave. No one had said, “shush.” No one had looked sideways at me when I said, “Gesundheit” But, and possibly this is the point, no one else said anything at all - at least not that I could hear. 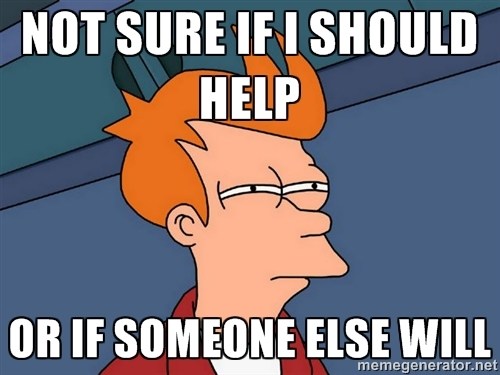 That others affect how we behave is well documented. The classic case study is the depressing murder of Kitty Genovese in 1960s New York. Despite multiple eye witnesses (as many as 38 are reported as having seen or heard the attack) no one intervened - either actively or passively, the event would launch a series of investigations into what would become known as the ”Bystander Effect.”

The experience of actively (and successfully) shocking my system to go from bystander to actor reminded me of a conversation I had with a friend earlier in the week. Discussing how we thought about meetings with leadership, I described a situation in which questions about methodology or data integrity would come up, two areas about which I am frequently better versed than anyone in the room. Despite this advantage, if I was not the one presenting, I would hesitate to interject and answer questions so as not to derail the conversation unless it was a crucial point and discussion would halt otherwise and prefer instead to close the loop after the meeting with a short memo. In these meetings, I ask myself a similar series of questions as those from the yoga matt: would others speak up? would people look at me if I answered the question from the periphery?

I think my preference to defer answering the question stems from the fact that I like the details and my natural inclination is to answer a question with all of the necessary caveats and nuance so ill-suited for conversation. When writing, I have more flexibility to answer the question briefly and provide support in footnotes or subsequent exchanges.

For me, the biggest difference is when I’ve prepared to present for a meeting, versus attend the meeting as an observer. In the former case, I have had ample time to think about how to simplify my message. Finding a way to package my ideas more quickly so that I can jump in has been something I continue to work on. I like to think I’m improving.