Today, I want to talk about Box.com and how to take advantage of some of the programmatic access they make available via their API.

I recently had the opportunity to build an application that would take a report we generate and store it for archival purposes in Box.

This is a story in parts. I’ll begin with the motivation for this project, followed by my early attempts to solve the problem with Python (where I’ll also discuss some of the lessons learned as they relate both to Python and to Box’s API). At this point, I’ll pivot to discussing a Node implementation - and more lessons learned. Specifically diving into how Box treats “native” Node streams and how that is different from other streams which implement the Node API. Finally, I’ll wrap up with a full example for future reference and some parting thoughts on the entire experience.

Hope you enjoy the ride!

Before getting to the nuts and bolts of how I ended up achieving this, some context.

The original design for the application to modify an existing lambda (a lambda written in Python that was already creating the report and storing it in S3), to also save to Box.com.

This meant including Box’s SDK as a dependency in the lambda - which immediately blew the size of the function well past the 3mb limit to edit in line on the online console. The size wasn’t a deal breaker because of some nice solutions like AWS Lambda Layers.

Unfortunately, the with Box’s SDK there are a few things that you need to know up front to make things go smoothly (of which I was aware of neither):

This led to two different sources of confusion:

Firstly, when creating an application / following the guides, there’s either no notice that the SDK can only work with the OAuth apps (or I missed it completely). As a result, since I was consulting the guides before reading the SDK documentation, I created the wrong type of application. The only remedy to which, of course, is to create a new one. (Certainly seems to me that an App Token application seems appropriate in this case, but it won’t work if you’re using the SDK.) 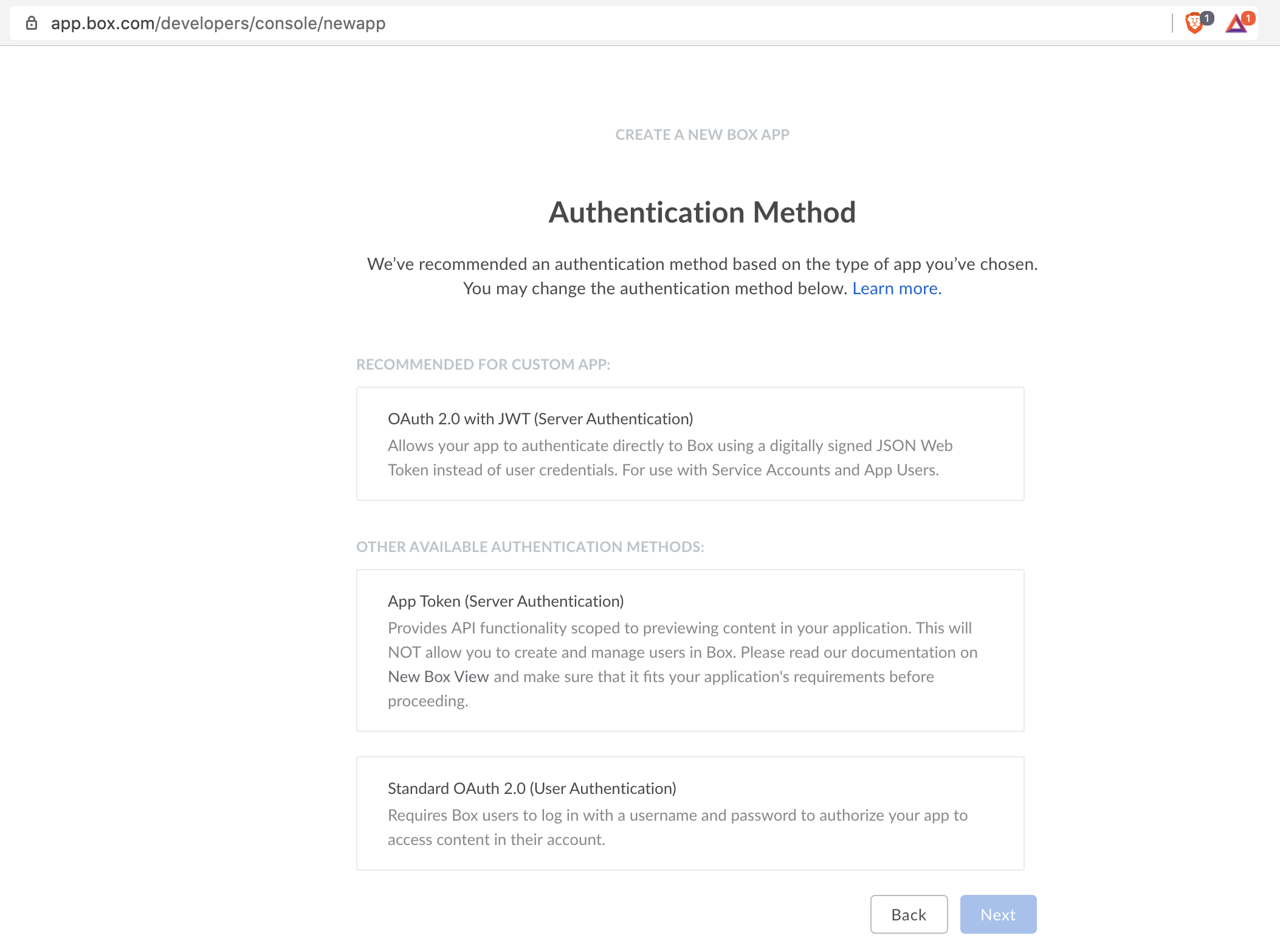 This was when the real fun began. Note that above is what should have happened, but not what I did for a while. Unfamiliar with this syntax, my initial requirements.txt (upon learning of the more specific jwt dependency) was the following (don’t do this):

If you don’t have the box-sdk["jwt"] or if you try to do both, things will not go as expected. Specifically, if trying to use the JWT module, Python will throw a NoneType error:

At this point, I might have been able to get Python to work, if I understood more about the governance model for Box.com. In fact, I could likely go back and do this all within Python now that I know more. However, at the time, I decided to simiplify the lambda by trying to do fewer things.

Now, instead of having a lambda that:

I split that into two distinct functions so I could focus exlcusively on the Box side.

Now that I’d configured successfully, What was it about the experience that I couldn’t figure out and thought another language could fix? Back to the governance model. When I signed up for Box, I apparently signed up outside of my organization — though I had full access to the company’s files. Not terribly familiar with the Box UI, I didn’t notice / appreciate this fact for a long time.

For example, when I first started, my root folder (the home directory for Box.com) had just the two grey folders in them.

The first “Yellow” folder was created when I created a “Box Note” — so I thought it was special. It was only later when I continued to test that I realized there was something fundamentally different about Folders I created (in my organization of 1) and those that were shared with me (again, I wasn’t actually “part” of my company’s Box org, more like a visitor with access).

Why does any of this matter?

Because what I was trying to do was verify that I could access a specific folder before trying to write to it — but every time I did, I received a 404. This generally means that a resource is not found, but Box expanded the definition:

404 application/json Client error Returned if the folder is not found, or the user does not have access to the folder.

This of course seems due to the decision to use a 403, instead of a 401 to indicate Unauthorized as is more traditional while 403 is for Forbidden.1

See, here’s another part of the Box experience that is rather confusing and not particularly well documented by the API: signing

while I could invoke the function, I couldn’t modify the

Problem Statement: Move a file from AWS S3 To Box

Cannot upload files with unspecified length/No way to specify file size in simple upload · Issue #144 · box/box-node-sdk · GitHub @mattwiller - for what it’s worth, the Chunked Uploader is not a panacea.

I tried refactoring to the Chunked Uploader, but my file is too small for it (a measly 871 bytes if I recall correctly) — which meant I needed to use @joedski ‘s solution from https://github.com/box/box-node-sdk/issues/143

My workaround was to do this: