the allure of banned materials

A few days ago, I got to talking with a friend about the Berkeley students’ recent protests and threatened protests in advance of speeches by Milo Yiannopoulos and Anne Coulter on campus. In both cases, the speeches were cancelled. In both cases, the speakers are known firebrands who have gained notoriety by taking an aggressive approach to topics and advancing their agendas. In both cases, the students also helped the speakers. They helped by creating controversy and by telling others what they could or could not do. Their protests effectively created scarcity in something that was not scarce before. After the conversation I started thinking about what effect the students had on the conversation and how those lessons might apply to writers.

I’m not advocating that all speech should be free. There are appropriate restrictions on speech (hate speech or speech that is designed to incite violence come to mind as obvious examples), but where that line should be drawn is not always clear. Where that line exists is really not the point, because it’s the fact that one does which allows controversy, and those who seek to take advantage of controversy, to flourish. It’s also why, in cases of ambiguity of whether or not speech qualifies as appropriately limited, I would lean toward allowing it — not because I would necessarily agree with the topic, but because of the effect that happens when you try to limit or boycott topics. 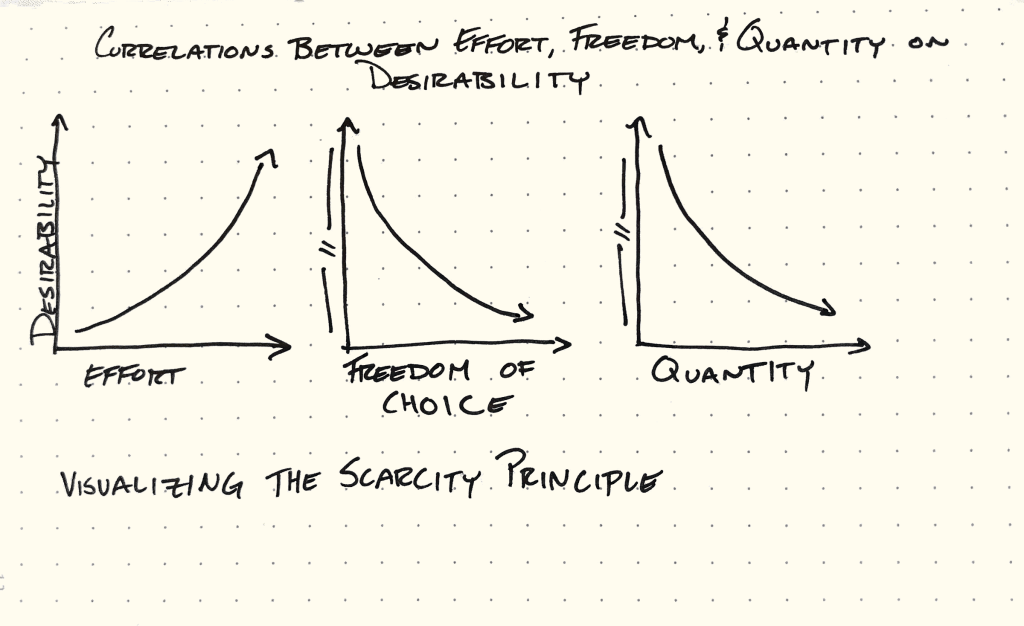 There are three main principles underpinning the effect on scarcity:

Looking at each in turn, you can see how the students of Berkeley helped Milo Yiannopoulos and Anne Coulter by calling for limiting their ability to speak and how those same tactics can be employed to promote your own work - if you have the stomach for it.

Several studies, including Ditto and Jemmott’s 1989 on the effect of rarity on evaluating a condition, Knishinky’s 1982 experiment on material and exclusive information’s effect on buying decisions, and Zellinger, Fromkin, Speller, and Kohn’s 1978 investigation into the effect of age restriction on desirability provide convincing arguments for the existence, and power, of the scarcity principle. The results of the Zellinger et al study, in which two groups of students were presented with advertising for a novel and then asked to rate their interest in reading it and belief of how much they would like it, showed that the students who were aware of limitations on access not only wanted to access the material more, but believed they would like it more - even before they’d seen it. As Yunkyoung Bae and Sukekyu Lee write in their 2005 paper (link), “According to the theory, whenever our freedoms are limited or threatened, the need to retain those freedoms makes us want them (as well as the goods and services associated with them) significantly more than before.”

In the Berkeley case, the implications of these studies would seem to imply that the students who protested against Milo Yiannopoulos and Anne Coulter speaking may have inadvertently given even greater sympathy to their causes than if they had allowed them to speak. By branding their speeches as restricted, other observers might view the speaker’s positions more favorably. The students then, by protesting, are acting like marketers - though likely unwittingly and for ideas they likely don’t agree with.

The idea that this is marketing was reinforced by a recent Ryan Holiday article in the Observer. In the piece, Ryan called out Milo for using the same marketing program he’d developed for Tucker Max’s “I Hope They Serve Beer In Hell” and which he’d documented in his book, “Trust Me, I’m Lying.”

The basic premise of the campaign was built on the idea that one of the best way to get people to do something is “tell them they should be allowed to see it.” Actively playing both sides of the discussion, Ryan stirred up controversy and created a bootlegger and baptist alliance to propel interest in the movie. The maelstrom that ensued called more attention and created enthusiasm among people who might not have otherwise taken the initiative. The really clever part was that by creating controversy in a demographic (i.e. women) which was not his target audience, he alienated a population that was never going to buy anyway, while stirring up enough interest in his own demographic (i.e. men) to make it a success.

Looking beyond the Berkeley case, the scarcity principle has broader implications for writers. In today’s environment, controversy appears to be a brilliant, and cost effective, marketing strategy for any writer with the stomach for it. While a writer’s potential reach has never been greater, the amount of noise through which consumers must traverse has also increased — following Sturgeon’s law, eponymously named after Raymond Sturgeon, an early Science Fiction author, who quipped that “…90% of everything is crap.” For readers, this onslaught of available information has led to an outsourcing to curators like Facebook’s Newsfeed, Google’s search results, and the front page of the Medium. Each of these sources’ recommendation engines look at how much activity the information is generating - whether in the form of likes, shares, back links, or responses.

As demonstrated with the scarcity principle and the reaction at Berkeley, one of the best ways to drum up activity, and by extension visibility, is by courting controversy. Whether you’re a student at Berkeley who would prefer others not agree with Milo Yiannopoulos or Anne Coulter or you’re a writer trying to gain visibility, you would due well to remember the scarcity principle.