This post is about combining these concepts to create an automated setup for linting (and much more)!

To demonstrate this concept, we’ll be relying on a few tools. The specific tools don’t matter as much as the concepts they convey, though I do think they make it easy to get up and running.

I’m assuming that we already have prettier, ESLint, Typescript, or some combination or another configured in the project.

Since we’ll be using husky and lint-staged, let’s make sure they’re installed now:

This will add them to our package.json under devDependencies:

Instead of putting the configurations directly into package.json, we can configure husky and lint-staged in their own rc files (.huskyrc and .lintstagedrc respectively) in the root of the project. Both support multiple file types, but for simplicity we’ll use YAML.

It’s also worth noting that we have several scripts in our package.json that we might want to use to ensure that everything looks as it should:

When we installed husky, we added a whole host of git hooks to our project. These are visible within the .git/hooks directory of our project:

In a .huskyrc file we can specify commands to run on any one of those hooks.

For example, using the pre-commit hook we can run the lint command every time we try to commit code:1

With this in place, assuming we have files staged and try to commit, we’ll see this pre-commit hook kick off the lint command before allowing us to commit the code.

At this point, we have a git hook configured, but it can still be a frustrating experience for teammates who may not have automatic formatting configured in their editors. If the code fails, as it did in this case, they’d have to manually fix the code, find the script that would fix it for them, or bypass the check. To discourage the latter, we want to make doing the right thing as easy as possible.

That’s where lint-staged comes in. So, let’s go configure that to see how it can help.

The basics behind lint-staged are the keys indicate which types of files are targeted and the value is a (list of) command(s) to be run against those files when they are staged.

A primitive example would run prettier against every file that’s staged:

A slightly more sophisticated set of rules will specify specific file types and multiple commands to run. For example:

It’s worth noting that as a result of this, we could likely get away with simpler commands in our .lintstagedrc. Instead of using the scripts specified in package.json (which include —ignore-files and other parameters, etc.), since the globbing is done upfront in lint-staged, we could just do prettier --write for example.

Note: Previously, adding git add to the array of commands would ensure that any command that modified files would automatically add them to the index. This is no longer necessary.

This rule will print the following warning to the console:

The only step left is to make sure that lint-staged is actually called. To do this, we need to return to our .huskyrc and add lint-staged to the commands we run in our hook:

Now, whenever we add files to staging and try to commit them, we first run the files through lint-staged. If they match our glob patterns, they are automatically passed to the command(s) specified. 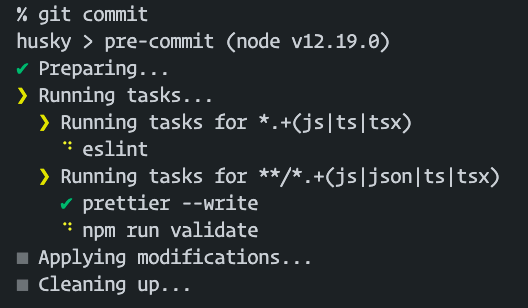 In this screen shot, we see that as soon as we try to commit the code, the pre-commit hook is hit and based on the file types defined in our tasks (each key of the .lintstagedrc), it automatically runs those files through the different commands (eslint, prettier --write, and npm run validate).

By combining lint-staged with husky, we’re able to run code through a series of processing steps before its ever committed and do so in a way where all of our teammates can benefit from it, without getting annoying error messages!